The State of the Houston Housing Market 2019 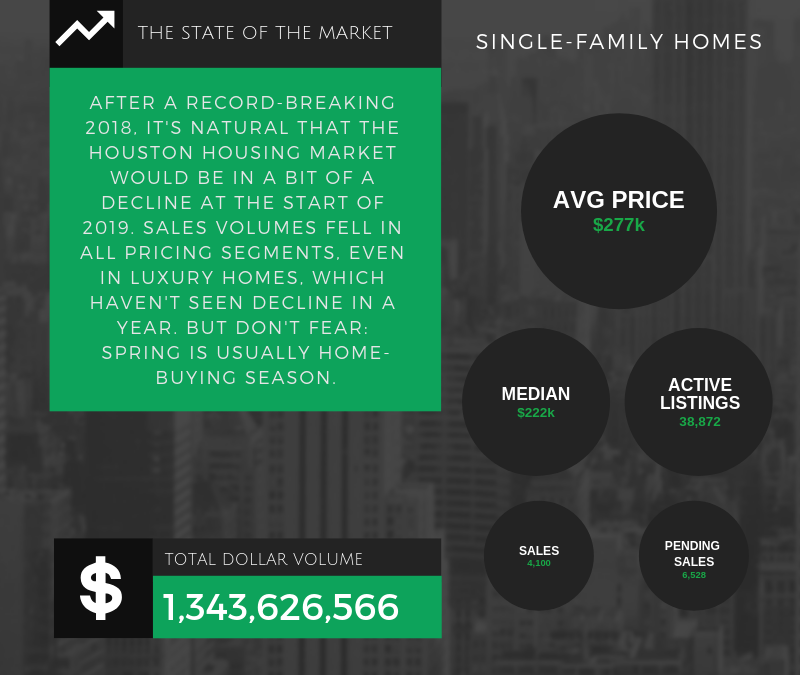 Okay, But It’s Not That Bad…

To put some perspective, the current Houston housing market is not actually the worst when comparing our numbers to the national numbers with the National Association of Realtors® (NAR). Actually, compared to the national standard, our numbers are right with the average. For example, while our single-family home months inventory (months a home is active on the market) number is at 3.7 percent, the NAR has the national number the exact same: also at 3.7 percent. However, we in Houston like to be the best, so for some, it might seem worse than it really is since numbers have gone down a little after such a phenomenal year.

However, with rent leases going up after a lot of down time, it’s easy to predict that what goes down in other areas of the market will come up eventually also. For those who may be losing hope looking at the market right now, fear not. There are fluctuations in markets often, and spring time is known for being a major home-buying season.

Something that people tend to overlook in the housing market is pending sales. This number relates to the months inventory. According to the Multiple Listing Service of the Houston Association of REALTORS®, “Months inventory estimates the number of months it will take to deplete current active inventory based on the prior 12 months sales activity.” The figures they provide are representative of the single-family homes market. Those figures would be the pending sales, which went from 5,829 to 6,528, making for a hopeful 12 percent increase.

Along with that number, the months inventory went from 3.2 to 3.7, giving us an increase of half a month. This relates to the Days on Market (DOM) number, meaning the average number of days it takes a for a (single-family, once again) home to sell on the market after the day it enters it. This number went down slightly from 68 to 65 days this year, which gave us the month number and decimal. Pending sales are nice to look at because they work as great predictors for what could be coming up next, and are usually rays of hope when the market is slow.

Although these next numbers might matter less to most people looking at the housing market, they’re still good to know: townhouse and condominium prices aren’t looking too hot, either. Townhouse and condo sales actually haven’t been looking to hot for awhile now, as this is their fifth month in decline. Only 324 units were sold this year, and last year, 362 were sold. This dropped sales by a whopping 10.6 percent.

Contrary to what we saw with single-family homes, though, the average price for townhouses and condos actually dropped by 2.6 percent. This means that the average price of a townhouse/condominium is now $188,268. Of course, the median price also went down, this time by 2.8 percent. The median price of townhouse or condominiums for the start of 2019 is now at $154,250. The months inventory (once again, how long a listing is on the market) grew from a 3.4 month supply to a 4.1 month supply.

Another bit of a bright side to look at is the renting aspect of the housing market. Lease properties have been the best they’ve ever been– at least, since November of 2017– which is always nice to hear. It’s been awhile, so perhaps now they deserve it. Single-family homes rose up to 16.5 percent this year– a pretty good-looking number. The average rent also went up a smidge– 0.4 percent. This means that the average rent in Houston went up to what is now $1,755.

And just to touch on townhouse and condominium rentals for a second, the rent for those also went way up, and up nearly the same amount this year in comparison to last year as single-family homes: 16.4 percent. And while still a small number, the average rent went down by twice the amount of single-family home rentals, decreasing by 0.8 percent. This makes the rent price for townhomes and condos in this winter of 2019 amount to $1,504.

To review, the Houston housing market may seem as though it is suffering to most, with single-family homes finally suffering after such a preposterous year in 2018. For single-family homes, sales went down, and prices went up. The same is also true for townhomes and condominiums. However, on the bright side, rent prices and leases are doing good. While single-family home sales did really great in 2018 and are now slumping into the new year, the rentals have been dropping for 5 months straight, so it’s nice to see some increase in that department.

Are you interested in selling or buying a home on the Houston housing market? Contact us at the Murray Group to get started.

Source: the Multiple Listing Service of the Houston Association of REALTORS®