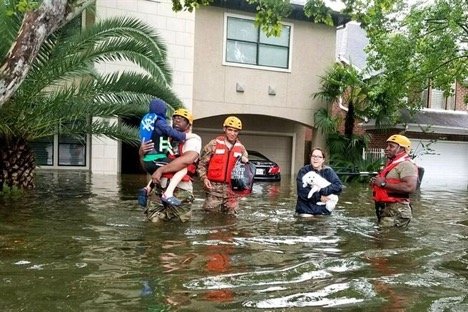 The destruction caused by Hurricane Harvey in Houston resulted in killing 18 people, rescuing 50,000 people, waterlogging 500,000 cars, and destroying 30,000 to 40,000 homes, and damage estimates have also surpassed $20 billion. A total of 51.88 inches of rain was also dumped on Cedar Bayou in southwest Houston, which has become the record for the most amount of rain from a single tropical storm.

Families affected by the floods had recently completed repairs to their homes that were damaged during the 2016 “Tax Day” floods, and since the median price of a home in Houston is $300,000, the overall value of the homes that were destroyed could potentially be approximately $15 billion.

One possible long-term solution to these flooding woes in Houston could be to buy out the flooded homes and bulldoze them to the ground, where they can then soak up most of the floodwater.

Ever since 1985, FEMA has worked with the flood district to acquire these kinds of homes due to them being simply built in the wrong area, and more than 3,000 properties built on 1,100 acres of land have been purchased in these kinds of buyouts. They were then bulldozed and allowed to soak up some of the floodwater before the water could even get to any reservoirs or bayous.

Money will be coming from the federal and state level, and Governor Greg Abbott has stated that Texas will likely need around $125 billion or more in terms of aid.

It seems to make more sense to purchase some of the deepest corners of the floodplains. It provides landowners with enough money to start their lives owner somewhere else and, at the same time, the flood district gets a great amount of absorption capacity. $2 billion in relief money would be able to ensure that a FEMA-backed buyout can prevent 7,000 homes from flooding ever again.

For more about the restoration of Houston, click here.